When it comes to uptime, the M900 Series is designed based on the same insights as the John Deere R900i platform, using similar proven components such as tank, boom, frame, and axles to meet quality and reliability levels that are expected from a high-quality trailed sprayer.

The round-shaped polyethylene tank is fully cradled by the frame and gives the machine a low center of gravity. Together with the standard double-linked ProRoad axle suspension, stability on the road and in the field are built-in. 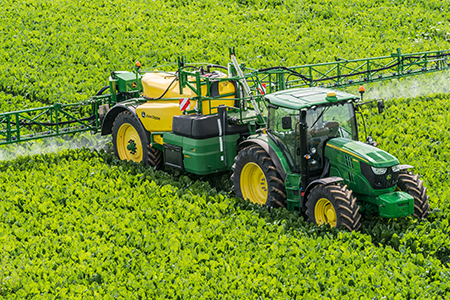 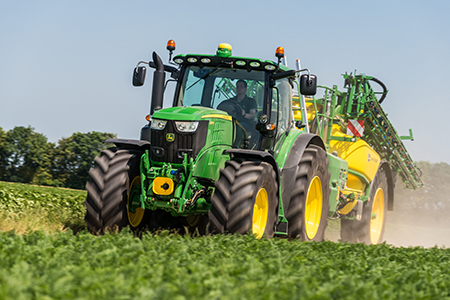 M900 stability in the field

The round-shaped polyethylene tank is fully cradled by the frame and gives the machine a low center of gravity. This comes together with the standard double-linked ProRoad axle suspension, providing stability on the road or in the field.

With its low center of gravity and even weight distribution, the M900 Series is built for stability. The entire mainframe is designed especially for the job. The heart of the mainframe is the cross structure in the center section to redirect forces, providing strength for a long lifetime. The frame design cradles the large polyethylene tank perfectly. The special tank shape offers deep sump while the steeply sloping bottom limits chemical residues. Due to the special tank design, additional tank baffles are not needed. It is easier to agitate liquid due to the smooth tank that has less risk of spray solution sticking to the inside of the tank.

The frame, tank, and single axle design offer better maneuverability. Regardless of the boom position, the level weight distribution helps to always keep the machine steady. 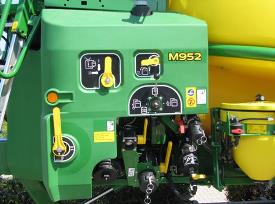 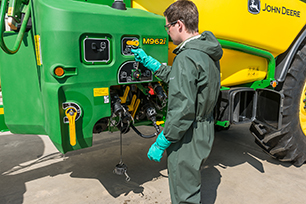 The standard non-return check valve in the system prevents back flow through the filling hose. This prevents point-source pollution and chemical spillage and protects the environment.

The PowrFill chemical inductor hopper, spray gun, and clothing lockers are partly stored behind the valve area. Filters and hose connections are protected and easily accessible for operation, cleaning, or maintenance.

The chemical safety card holder is located near the platform, making the information readily available.

Benefits of operator’s station design include:

6-cylinder dual pumps collectively work together to fill the sprayer 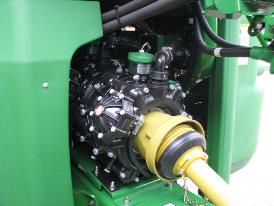 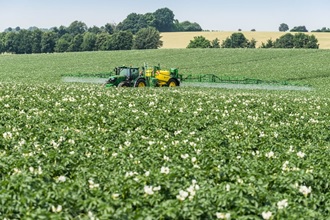 Once low flow application rates are frequently used, it is highly recommended to upgrade the machine with the low flow rate bypass kit (BWZ10081). 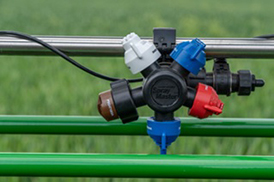 Air valves ensure liquid circulates up to the nozzle bodies 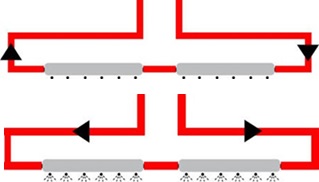 Prevent underdosing or weed triangles at spray start with the pressure recirculation spray system. Pressurized spray liquid circulates right up to the nozzles. Each nozzle body is air or electric operated to provide fast on/off switching, which prevents missed areas at spray starts. The air supply lines are connected to the nozzles in a section layout.

The spray liquid is circulated directly through the spray line under pressure. This ensures the right concentration under the right pressure directly at the nozzle body and eliminates triangles of weeds in the field and under dosing when starting spraying.

This circulation also allows operators to rinse out spray lines without spraying (such as when weather conditions change).

Benefits of pressure recirculation functionality in the spray system include: 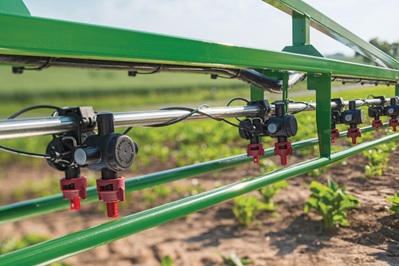 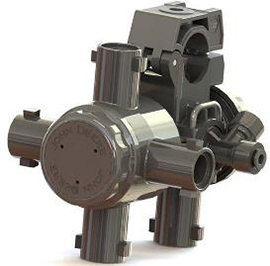 The optional TwinSelect in-cab nozzle control with pressure recirculation functionality allows immediate switching between two different nozzles, either manually or automatically. It helps to save valuable time whenever there is a need to quickly change nozzles and allows a wider range of spraying speeds for increased productivity.

TwinSelect provides five nozzle outlets split between one fixed and four manually selectable nozzle positions on the rotating body, with the ability switch between two nozzle positions from the cab. 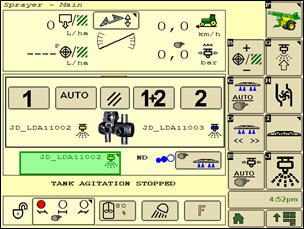 Switching between nozzles in the display 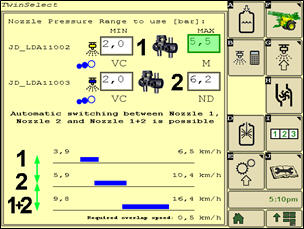 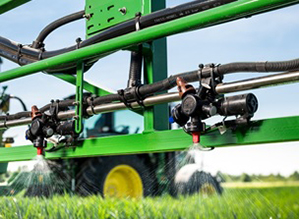 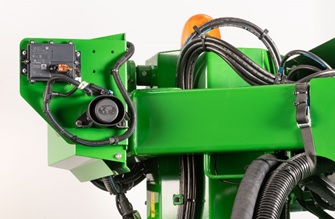 Individual nozzle control spray system provides efficient localized crop protection application. Save up to 5 percent in crop protection chemicals – up to 6 EUR per hectare*. The electronically controlled system reaches its ultimate potential together with the pressure recirculation spray system functionality.

Preforming a nozzle check is easy; just walk behind the spray boom with the wirelessly connected key fob to activate nozzles on or off on the go.Sonic signal informs the operator of the system status. 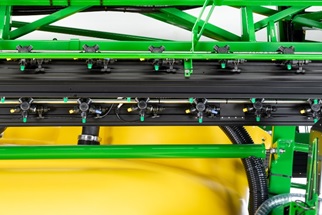 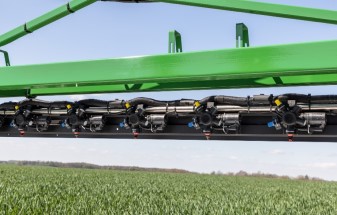 Expand the available spray window in challenging weather circumstances with 25-cm (9.8-in.) nozzle spacing. The narrowed nozzle spacing makes spray applications with reduced spray boom heights possible. Spray is less suspectable to drift in changing weather circumstances. To achieve the best agronomic results, the 25-cm (9.8-in.) nozzle spacing layout is based on an on-center design to ensure sufficient pass-to pass spray overlap. To minimize the risk of blocked nozzles or sedimentation in the spray lines, pressure recirculation is embedded, and an additional 80-mesh pressure filter is located at the center frame as close as possible to the nozzles. 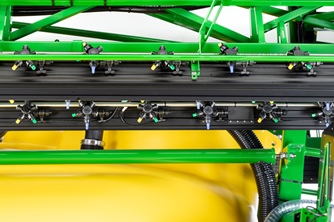 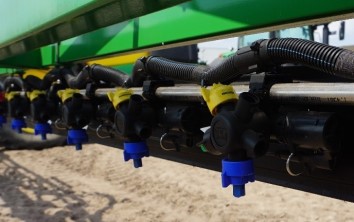 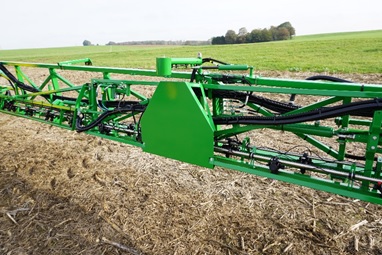 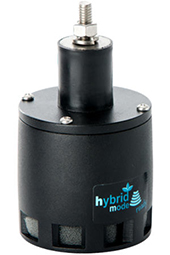 A stable boom ride is one of the basics for a successful spray application.

Ultrasonic sensors mounted at each end of the boom measure the height of the boom wings above the target, the integrated IMU sensors the measure the inertia. If the slope of the field changes and the spray boom is no longer at the desired distance to the ground or crop surface, TerrainCommand Pro controls the boom variable geometry, tilt, and height automatically.

Benefits of TerrainCommand Pro include:

Rinsing and dilution is fast, automated, and easy with AutoDilute system 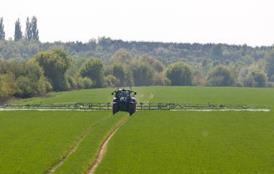 AutoDilute system purges out diluted liquid by the boom 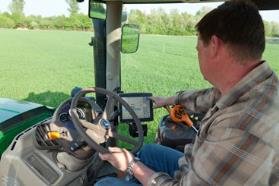 AutoDilute pump located in the frame

NOTE: Always refer to the chemical package and read the safety requirements when diluting or rinsing a sprayer.

AutoDilute enables operators to dilute the remaining liquid in the main solution tank without leaving the cab. Operators save time since there is no need to walk through the sprayed crop to manually reposition sprayer valves. The time savings from AutoDilute helps operators prepare the machine faster for the next application and meets the environmental legislation in countries where dilution of the remaining crop protection chemical in the machine is a legal requirement (refer to local legal requirements).

Benefits of the AutoDilute integrated multi-cycle dilution system include: 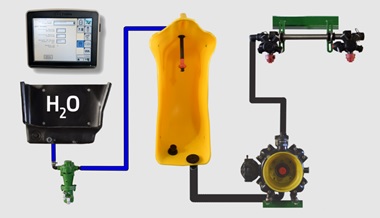 Once AutoDilute or continuous dilution is activated, the dilution process starts with the activation of the hydraulic pump. Water is drawn out of the rinse tank and transferred from the separate AutoDilute pump to three rinsing heads. This additional rinse water flushes the inside of the tank and dilutes the remaining tank content. As soon the sprayer pump is activated, additional water dilutes the liquid system. Once the master valve is opened, diluted tank content is sprayed out. Dilution can be done automatic stepwise (AutoDilute) or in continuous dilution mode. AutoDilute pump capacity is 80 L/min (21 gpm).