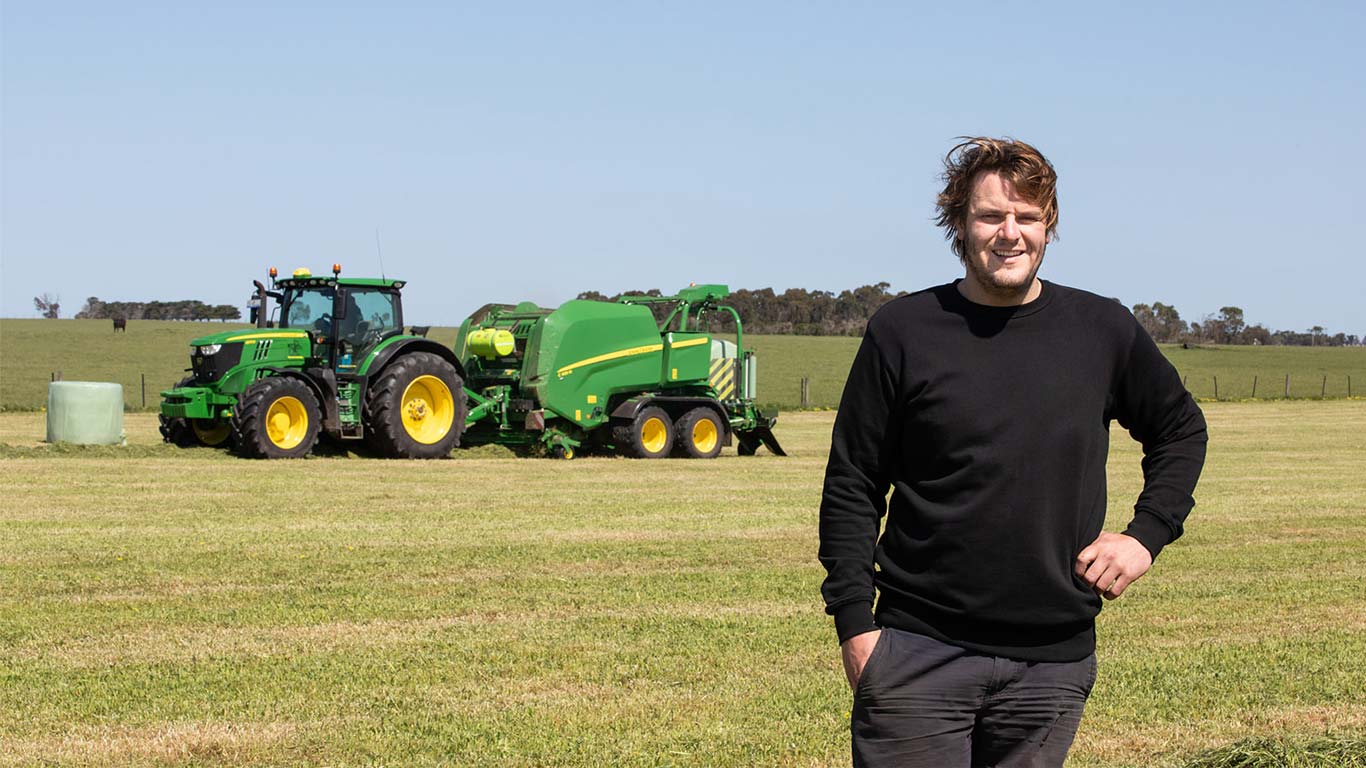 Crestmead, Queensland (19 October 2020) Sitting in the cab of his new John Deere 6215R Tractor, Thomas Haymes co-ordinates the operation of his contracting business, while taking in some of South Gippsland's most stunning farming country.

Based from Yarram, Victoria, Haymes Contracting is a family-owned and operated hay, sowing and silage enterprise. The business is headed up by Thomas, a fourth-generation dairy farmer who decided to take on the contracting arm of the business five years ago.

"Dad has always had a hay contracting business as a side to the dairy and I was naturally attracted to that line of work, as I really love operating machines," Thomas said.

"We do everything from cultivation and seeding works to round bales and bulk silage."

Following behind the 6215R, is a new John Deere C451R Variable-Chamber Wrapping Baler, or Combi Baler as it is commonly referred to. The Combi was recently added to tackle increased demand for silage, and became the Haymes family's twenty-first John Deere baler. An in-demand business, Haymes Contracting produced 28,000 bales last year and wrapped 20,000.

"We looked around at a few other Combis, but the John Deere model just suited us best. It has three powered fixed rolls and two large diameter belt driving rolls inside the chamber, with a high capacity, high performance two-metre-wide feeding system," he said.

"We expected another high standard John Deere - but it's so much more. It now has a wrapper on the back which always works, so you really don't even have to think about it. When it runs out of wrap, it tells you and you can just change the roll - and that's the only time you have to get out and do anything. Even the roll arms are hydraulic, so you never have to lift anything higher than your waist.

"It saves us so much time and, with the updated Fast Release System (FRS) and the 35-rpm wrapping arms, it means we can bale faster than ever."

Thomas has also noticed a difference in production levels with the High Capacity (HC) Premium rotors and a more versatile, productive pickup. There's an exclusive drop-floor concept that removes even the worst plugs and the Maximum Density (MaxD) bale chamber enhances versatility and bale weight.

Thomas said the Generation 4 CommandCenter™ and GreenStar™ Displays connect seamlessly with the ISOBUS in the baler, allowing the operator to control the baler from the tractor's monitor and when combined with an improved video camera, switching machines has never been easier.

With 10 John Deere tractors, as well as a Self-Propelled Forage Harvester in the business' fleet, Thomas said the reliability, productivity and cutting-edge technology offered by the brand was paramount to the success of the Haymes Contracting operation.

The business' first purchase was a 50 Series John Deere 27 years ago and every machine since has been green.

"We have had everything from the hundred Series, ten series, a few 20s, we've still got quite a few 30 Series and now the 6R Series which is an absolute cracker," Thomas said.

Thomas' favourite feature of the 6R Series Tractor is streamlined control to maximise the efficiency of the machine.

"It's got the new CommandPRO and everyone just loves driving it. It's so much more productive running everything through one joystick and having all the controls at your fingertips," he said.

Thomas also emphasises the user friendliness of the upgraded 6R Series Tractor and the fact there isn't a big learning curve when drivers first take to the cab. Knowing the performance of the machine remains virtually unchanged, no matter who is behind the wheel, is particularly important in the height of cutting season when up to six contractors join the full-time team.

"The John Deere is so easy. You just turn it on and everything you need to know, and more, comes up on the computer screen. The driver can then easily load it up with what they want to do and get going," he said.

"For example, if we are running a baler on the back, we have pre-loaded controls that work with that particular baler, so all we need to do is click two buttons and the operator has the functions preloaded. Same if we attach a seeder or another piece of equipment."

In addition to driving efficiency gains, the convenient and cutting-edge technology, including the AutoTrac™ automatic steering, greatly reduces the operator's margin of error and fatigue.

Consistent and comprehensive support has also been key to the Haymes coming back to John Deere again and again over the years.

"The support you get from John Deere is incredible. Our dealer pretty much runs a twenty-four-hour service and their mechanics are very knowledgeable either over the phone or on the ground. We know they'll be there to fix it."

About John Deere:
Deere & Company (NYSE: DE) is a world leader in providing advanced products and services and is committed to the success of customers whose work is linked to the land - those who cultivate, harvest, transform, enrich and build upon the land to meet the world's dramatically increasing need for food, fuel, shelter and infrastructure. Since 1837, John Deere has delivered innovative products of superior quality built on a tradition of integrity. For more information, visit John Deere at its worldwide website at JohnDeere.com in New Zealand at JohnDeere.co.nz