Comfortable power in a compact package 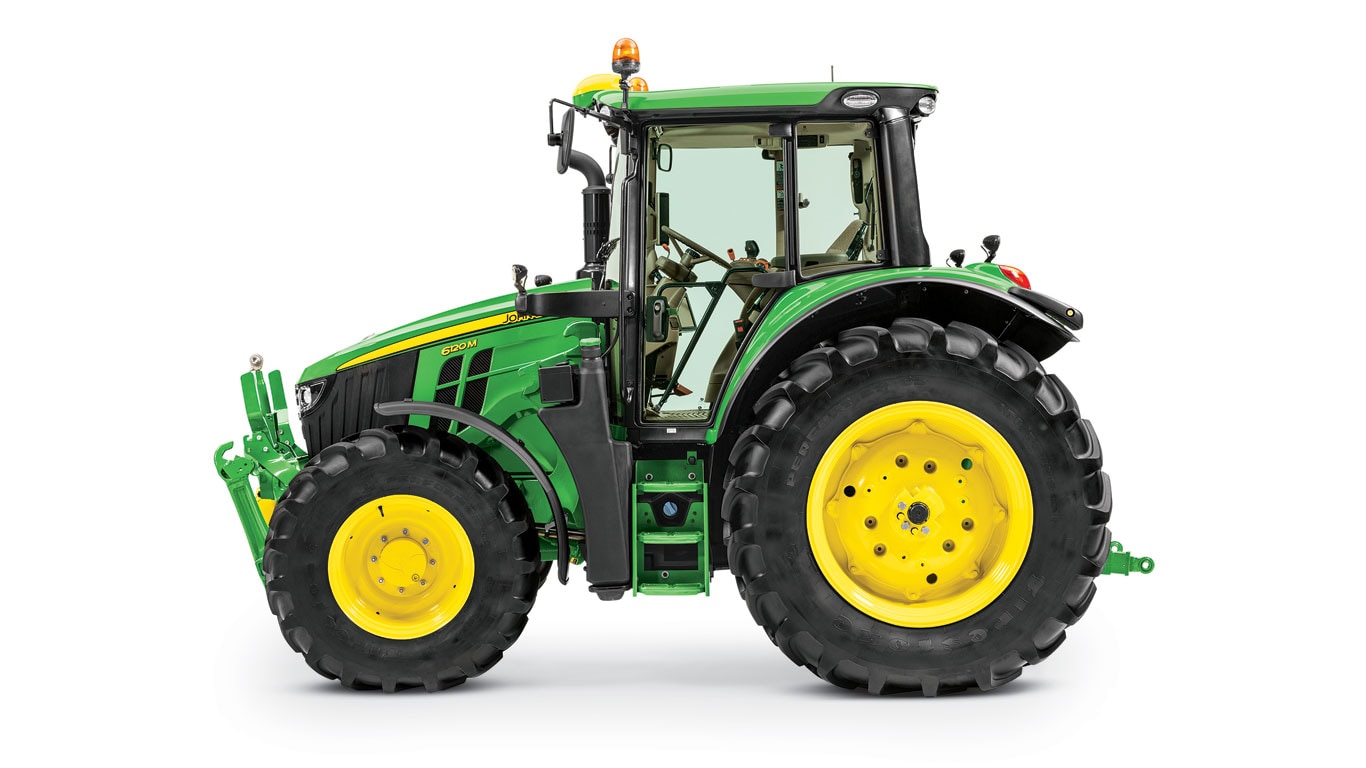 These replace the previous 6M, 6MC and 6RC Series and include three new four-cylinder models from 90 to 120 hp, featuring a 2.4 m wheelbase. This is a more compact 6M Series tractor than John Deere has offered before, with the low bonnet design presenting a clear view to the front of the machine. In addition, a slimmer steering wheel cowl and the newly designed panoramic window in the cab roof provides full visibility for loader work or operation in confined spaces.

Improved manoeuvrability is a result of the short wheelbase, which allows a tight turning circle of only 4.35 m on the new four-cylinder models. Despite their slim design, these full-frame concept tractors feature a maximum permissible gross weight of 10.45 tonnes, which means an unrivalled payload capacity in this class of up to 4.7 tonnes.

All these latest 6M Series tractors feature a newly designed cab that is significantly brighter and more modern in appearance, as well as extremely quiet, with a rating of 70dB(A). All the important operating functions are located on the right-hand panel, which has been completely redesigned, while models equipped with the CommandQuad™ transmission can be optionally fitted with a Compact CommandARM™, with the functions located on the armrest.

Up to four mechanical or electric SCVs are available – the latter is a new option available for the first time on these tractors. Switches on the electrohydraulic joystick are fully programmable, and direction of travel can be changed on both this and the mechanical joystick via a push-button. Driver comfort is also enhanced by mechanical cab suspension and the proven TLS (triple link suspension) front axle, while 360° LED lighting is optionally available for perfect illumination of night work.

Three different gearbox options are offered on the new 6M Series. PowrQuad™ and AutoQuad™ are four-step powershift transmissions, while CommandQuad Plus offers fully automatic gear and range shifting without using the clutch. Thanks to EcoShift, the maximum speed of 40kph is achieved at a reduced engine speed of 1590rpm. In addition, AutoClutch means the operator can comfortably stop and restart the tractor simply by using the brake pedal.

Commencing MY20, a 1-year JDLink™ subscription will now be in base on all 6M models. A new version of the SF6000 receiver is available with updated antenna. Functionality and aesthetics of the receiver remain the same.

About John Deere:
Deere & Company (NYSE: DE) is a world leader in providing advanced products and services and is committed to the success of customers whose work is linked to the land - those who cultivate, harvest, transform, enrich and build upon the land to meet the world's dramatically increasing need for food, fuel, shelter and infrastructure. Since 1837, John Deere has delivered innovative products of superior quality built on a tradition of integrity. For more information, visit John Deere at its worldwide website at JohnDeere.com or in New Zealand at JohnDeere.co.nz.