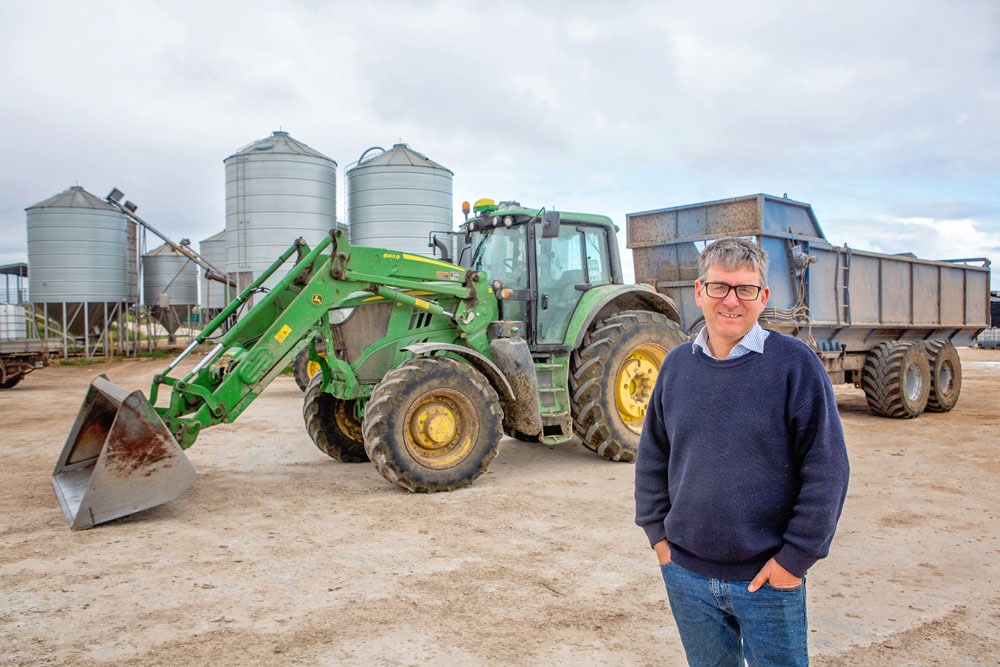 Crestmead, Queensland (23 November, 2020) — AS a stayer in an industry plagued by its fair share of challenges, South Australian dairy farmer James Mann is assembling the pieces of the puzzle for an efficient, sustainable business.

For James and his wife Robyn, who built their 20 million litre per year Donovans Dairy from the ground-up, this 'jigsaw' boils down to understanding their profit drivers and demanding a value proposition from every investment, whether that be a new John Deere tractor or acquiring more land.

Investment in land has underpinned their expansion from 120 to 2,300 milking cows in South Australia's lower-south east.

They also make judicious investments in machinery to take their business to the next level.

James believes in outsourcing to the experts and relies on contractors for most of his cropping program including sowing, silage and around 40 per cent of hay mowing.

But when it comes to activities which bolster the profit drivers of an intensive livestock business — fertiliser and feed — he keeps it in-house and relies on his John Deere fleet.

The most used machine, a 6175M Tractor, clocked up 3,300 hours in the first 14 months. The 6M is responsible for feeding out 15,000 tonnes of chopped silage, 3,000 silage rolls and up to 1,500 bales of hay and straw each year. It is paired with a 683R Front End Loader featuring the new Automatic Mast Latch for quicker connection and disconnection.

With numerous operators needing to sit behind the wheel, James' purchase criteria included the ability to ensure consistency and efficiency. This is where JDLink™ has shone across the Donovans Dairy operation.

"We employ 24 full-time staff and three of these do the feeding out, so technology needs to be easy to use, easy to track and efficient," he said.

"One of the reasons I bought the 6M Tractor was it was the most comfortable tractor I had been in but, with the growth of the business, I don't get to drive it much anymore."

The 6M also has the tick of approval from staff, who requested 'a tractor just like the one we already have' when it came time to replace an older 6155M Tractor. Another 6175M Tractor will soon join the ranks and with features such as front and rear PTOs for greater mowing capacity, James is confident it will keep the entire team happy.

Data is king in the dairy industry. The Manns collect herd data twice a day at milking and overlay this with individual cow tests six times a year coupled with genetic information from genomic testing to paint a picture of how they are turning feed into saleable product.

"We are in the business of converting feed to milk, so we are always looking for opportunities to achieve this, whether that be land, trading stock, meat or technologies," James said.

The same data-driven mindset is now extending to forage and crops, and the value which can be extracted from precision agriculture.

Fertiliser is a key input for the Manns, and they rely on their 4240 Universal Display and StarFire™ 6000 Receiver for in-season repeatability and signal stability.

"JDLink and Gen 4 4240 Universal Display are part of the puzzle to improve our input efficiency," James said.

"We're involved in a pasture monitoring project run by DPI Victoria and Dairy Australia, using tools such as drones and satellites to identify areas to target inputs, and we can see the potential to integrate technologies like this with GreenStar — it is part of the continuous improvement we strive for in our business."

James is entrenched in Australia's dairy sector, as chair of Dairy Australia, and has notched up 30 years in the industry, however a hint of an accent gives away his United Kingdom origins.

He was raised on a mixed farm at Bawdsey, England, and came to Australia in the mid-1980s to study at Marcus Oldham College, Victoria.

In 1989, two years after James graduated from Marcus Oldham, he and Robyn purchased their first property, at Numurkah, near Shepparton, in Victoria. They sold it nine years later to trade up to a more sizeable holding over the South Australian border at Wye, south-east of Mount Gambier.

This 600-hectare beef and sheep property was soon transformed and before long they were up and running. They built a dairy and were milking just three months after they moved, expanding the dairy herd from the 400 cows brought over from Numurkah to 1200 head in the first year.

The Manns now farm 1700 hectares, including 10 centre pivots over 480 hectares of predominately perennial ryegrass and white clover, 40-50 hectares of corn for pasture renovation and silage production, dryland hay and silage production. In addition to dairying, the livestock side of the business includes opportunistic cattle trading, composite ewes, and finishing Friesian bull calves off as two-year-old steers.

A contract with Lion Dairy & Drinks, and their proximity to milk processors on both sides of the border, enables them to direct product as required.

It took a lot of 'sweat-equity', plus a good relationship with the bank, but ask James what drove this growth and the answer is simple: "I like to make things happen — I like to see a plan come together."

About John Deere:
Deere & Company (NYSE: DE) is a world leader in providing advanced products and services and is committed to the success of customers whose work is linked to the land - those who cultivate, harvest, transform, enrich and build upon the land to meet the world's dramatically increasing need for food, fuel, shelter and infrastructure. Since 1837, John Deere has delivered innovative products of superior quality built on a tradition of integrity. For more information, visit John Deere at its worldwide website at JohnDeere.com in New Zealand at JohnDeere.co.nz.